Every year brands that want to take a stand on certain causes take the opportunity to do so at the Super Bowl or “Brand Bowl” as it’s often called, taking advantage of larger and more diverse viewership. This year, as opposed to other recent years, there has been a strong public reaction to cause-related ads, both positively and negatively, as many people automatically believe that publicly supporting causes directly correlates to a political view or opinion.

Nevertheless, I’m always for brands taking a stand! Here are four of my favorite cause-related ads at this year’s Super Bowl:

Ironically the first pre-released Super Bowl commercial I watched was Audiâ€™s gender equality ad, which I stumbled upon on Twitter from a user that was attempting to minimize that cause.

Audi takes a stand for equal pay, citing a 2016 report by the U.S. Congress Joint Economic Committee that finds women were paid 21% less than men on average. They also made a statement that they signed the Equal Pay Pledge in December as part of their ongoing commitment to pay equality.

â€œThis is a story of a young girl competing in a downhill cart race in her hometown. As the fearless daughter weaves her way through a field of competitors, her father contemplates whether his daughterâ€™s worth will be measured by her gender through a series of provocative questions. It is a reminder that progress doesnâ€™t belong to any one group. Progress is for everyone.â€

The 1-minute ad ends with the phrases Equal Pay For Equal Work and Progress for Everyone as well as the hashtag #DriveProgress. The tweet from Audi during the Super Bowl has already received 24k likes and 9k retweets, with some extra love from actress Elizabeth Banks, who is affiliated with Audi and the campaign.

This ad hit me on multiple levels. Emotionally I can connect with the fatherâ€™s compassion toward his daughter and his desire to see her succeed and not be devalued simply based on her gender. As a woman, surely the equal pay issue is something that I can connect with, although I personally have never worried or cared about this myself, as I have always viewed and used my gender to my advantage. It was applauded by womenâ€™s and diversity rights groups, but didnâ€™t come without controversy of course, from seemingly misogynistic persons who want to taut equal pay as a nonissue despite the research.

This is the second and only other prereleased ad I saw before the Super Bowl. Budweiser’s YouTube page says: “This is the story of our founderâ€™s ambitious journey to America in pursuit of his dream: to brew the King of Beers”. The commercial shows a fairly realistic portrayal of Budweiser founder Adolphus Busch as he travels from Germany on board a ship and sets foot on U.S. soil and eventually meets co-founder Eberhard Anheuser in St. Louis, Missouri. It’s truly the American Dream story of two foreign-born immigrants that meet in the U.S. and create what’s now known as an “American” brand.

With the relevancy of the anti-immigration policies that President Trump is supporting, Budweiser is taking a bold move supporting this cause by possibly alienating its fan base with this immigration story. Again, many people want to perceive cause-related support as playing politics rather than just seeing it for what it is: the true story of the founding of this company. There are many German-descended immigrants in the U.S., especially in the midwest, so why not embrace this? Not surprisingly, it had it’s trolls who created a #BoycottBudwiser (notice the misspelling) that trended on Twitter, with both sides weighing in. But the video has received the most views of any commercial so far, with 24 million on YouTube, and the Budweiser tweet during the Super Bowl with hashtag #ThisBudsForYou has received 51k likes and 24k retweets so far.

From my perspective, as a child of immigrants and an entrepreneur myself, I believe this is a beautiful portrayal of the American Dream–making the most out of the resources and opportunities one’s given and becoming successful doing it. It’s the story of every immigrant–it captures trials and tribulations, emotions and opportunities, and many people can empathize with it. Great job Budweiser!

Airbnb has responded quickly to create a massive social campaign over the last 2 weeks using its platform to round up volunteers to help house immigrants who have been affected by the U.S. immigration policies and Executive Order. The company’s commitment to help refugees and immigrants is augmented by its pledge to support 100k immigrants over the next 5 years and donation of $4 million to immigrant and refugee related charity groups. 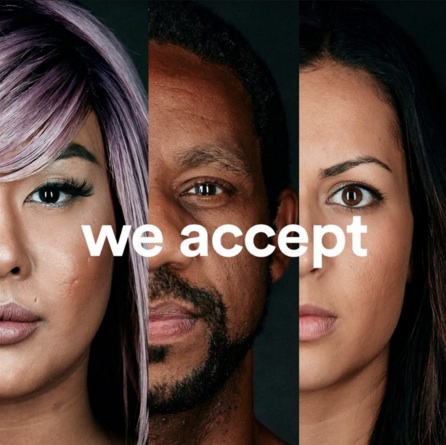 So why this ad? According to company founder Brian Chesky via Twitter, Airbnb decided to pay for the Super Bowl
spot just this Thursday and ended up filming the ad that same night with Airbnb employees. â€œIt’s always been part of our family’s value system to love everyone. We all belong to this world,” was tweeted by Airbnb.

The ad promoted loving everyone, accepting diversity no matter who you love, who you worship etc and used the new motto along as the campaign hashtag #WeAccept. The tweet posting the ad on Twitter has already received 52k likes and 26k retweets since it was posted last night. Once again, some people on Twitter took to sharing their discontent with Airbnb’s stance and criticized the company for politicizing.

It’s really hard to not approve of this message when the message is more about love and inclusiveness then it is specifically about immigration. You must really have a chip on your shoulder to not like the message of this sweet and sincere ad. As a child of refugee immigrants and an Airbnb host and guest myself, I strongly support the company’s mission and pledge and I believe it was a compassionate move for Airbnb considering the company now operates in over 119 countries around the world. Also great move using the company’s own employees to also reflect and promote diversity both in general and at the company.

Okay so who is 84 Lumber? The company took the opportunity to directly tackle the immigration issue.

A post on Twitter said “See a mother & daughterâ€™s symbolic journey toward becoming legal American citizens.” The full uncut film on YouTube page shows a mother and daughter in Mexico that leave their home town in search for a better opportunity in the U.S. They travel through not such pleasant circumstances, like riding in the back of a pickup truck, trekking through the dessert, and running through rain. At the end they come up against “the wall” and are visibly saddened and defeated, only to find a door that opens up to their new opportunity in the U.S.

I’d never heard of the company, so from that standpoint this was a good awareness campaign, tied to a strong, relevant cause. Emotionally, as an immigrant, as a mom, as a human, this has to pull at your heartstrings somehow. Of course, not without it’s own controversy from the folks who want to build a wall with Mexico and keep out immigrants. Good move having the immigrants be a mother and daughter, reframing the view of who immigrants are away from this perception of “murderers and rapists” that gets thrown around sometimes.

That said, perhaps because this company is not historically a big social media user (they only have 19k followers on Twitter as of today), they didn’t take advantage of creating a hashtag. I believe the campaign could have benefited from creating a hashtag, also for tracking purposes, even though the tweet received 32k likes and 17k retweets.

And of course, you can’t forget that Coke recycled a previous Super Bowl’s commercial of America The Beautiful being sung in multiple languages. The message of course is promoting diversity, especially as the most recognized brand in the world. Naturally anything that promotes diversity in the U.S. causes some backlash as many people erroneously believe that the U.S. has an official language (it doesn’t!) of English (it’s not!). This commercial doesn’t get old, it’s still one of my favorites!

Here is that Coke ad.

Do you agree or disagree? Did I miss one you liked? Share your comments below.

Alexandra is a Social Entrepreneurship and Impact researcher and strategist, freelance writer and author and founder of Mission Based Branding Institute research and training platform for social impact. This reformed banker turned entrepreneur is also an arts and culture lover, traveler (5 continents and counting!) and citizen of the world! Follow her musings at @OnAMissionAlex.